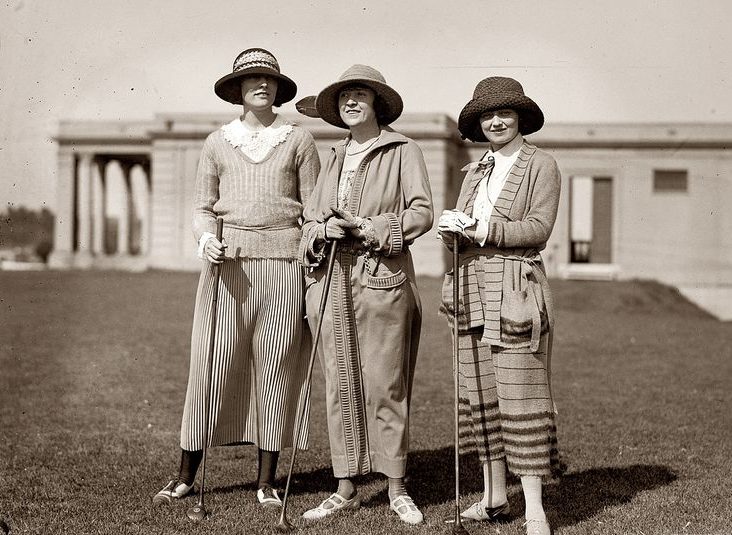 When not behaving like a wiseacre, the Clubwoman writes about golf for the LPGA Women’s Network and the Albany Times Union. You won’t get any swing tips from her, but she has plenty to say about the social anthropology of a complex, infuriating, and profoundly gratifying pastime. This page provides links to recent posts and some oldies but goodies.

Back of the Pack
That’s me, at the back of the pack. Why do I bother to compete, when I don’t come anywhere near a win? Because I focus on my own micro-competition, not the bigger picture.

Amateur Hour at Augusta
The Augusta National Women’s Amateur is better than no women’s tournament at all at Augusta. But it’s the wrong women on the wrong weekend.

Going Private
If your fantasies are running toward plush fairways, pristine greens, punctual play, and a place where everybody knows your name—not just in the bar, but also the pro shop, locker room and parking lot—then maybe this is the year you join a private club.

The Invisible Golfer
The charity tournament I played in raised good money for a good cause, but the event transported me back to an era where “golfer” was synonymous with “male.”

How to Help a Newcomer Make Friends With Golf
As an experienced golfer, you can have a big impact on a newcomer’s understanding and enjoyment of the game while improving your own skills at the same time.

How to Begin Golf as an Adult
Golf is a complex sport, but as a beginner you’ll find it fun from the get-go if you tap into its social aspects, make some effort to learn the game, and keep the pressure off.

Best Frenemies: Competing in a Golf League
Leagues are one thing in team sports, and another in golf. In our arena it’s not Us Against the World, it’s You Versus Me. You’re competing head-to-head with your fellow league members, and for many of us, that means intimate friends.

What Does a (Golfing) Woman Want?
The simple answer is, women want the same things as men: opportunity to play and enjoyment when we do it. But because we’re women, golf tends to toss a lot of loose and fixed impediments in our way.

Throw Out Your Golf Shirts!
The collared knit jersey with short sleeves was once the hallmark of serious athleticism. Now it’s popular not because it frees up the body for vigorous endeavor, but because it drapes comfortably over the paunch. It’s the uniform of tech entrepreneurs, chain store salespeople, and week-long casual Fridays.

Three Things That Women Who Play Golf Have in Common
Women are a minority in golf discriminated against by the very structure of the playing field. What does it take to succeed in the face of adversity? Assertion and patience.

Golf and Sex and Trump. (Have I Got Your Attention?)
In golf and other arenas, Donald Trump is entirely capable of recognizing professional competence in women. It just doesn’t count unless accompanied by appropriate weight, meticulous but invisible self-care, keen fashion sense, and non-expression of viewpoints that differ from his.

Golf Is Hard. You Gotta Problem With That?
People like me play golf precisely because it is difficult. When we do do well, the experience is profoundly satisfying. In the meantime, golf’s mental and physical challenge demands attention that diverts one from worrying about the real challenges of life.

Get Over Yourself: Ten Ways to Turn Around Your Round
Medical metaphors work best to describe my scores—manic depressive, EKG-like, schizophrenic. I often find myself trying to recover not just from a bad hole, but a whole series of mishaps. For my benefit, and yours, I’ve gathered a list of tactics for finding the comeback trail in the middle of a round.

Part 2: Tactics on the Course